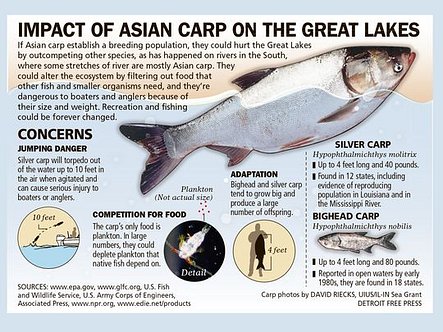 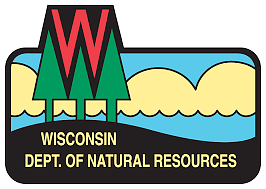 Asian carp are perilously close to getting into Lake Michigan through Chicago-area rivers and canals.

We all know this is an urgent threat. The carp are an invasive species, and they're huge -- they can grow to be four feet long and weigh 100 pounds. If they get into the lake, they'll devastate the ecosystem and push out native species, irrevocably changing our fishing, swimming and sailing habits.

We need to act now to stop the Asian carp before it's too late.

To stop them, the locks in Chicago need to be immediately closed, and we need a long-term plan to prevent the carp from invading the lake.

Now is the time to write to our elected officials everwhere to stop the carp. A sample letter is a click away. Just click on the link below. Invaders on the move

Asian carp species [PDF] introduced into the United States are headed toward Wisconsin waters. Asian carp environmental DNA has been found above the electric dispersal barriers in Lake Calumet, seven miles from Lake Michigan on the Indiana-Illinois border, and in 2013, in a single water sample collected from Sturgeon Bay, WI. Individual adult fish have been found on occasion in Wisconsin waters of the Mississippi River and in the Lower Wisconsin River.

The good news is no young fish have been found nor have any other signs of reproduction been found in any Wisconsin waters to date.

Also, dams on the Wisconsin River at Prairie du Sac and on the St. Croix National Scenic Riverway at St. Croix Falls would block Asian carp on the Lower Wisconsin River or the Mississippi River from travelling farther inland in Wisconsin.

These Asian carp species are a serious concern because they can aggressively compete with native commercial and sport fish for food and can potentially disrupt entire ecosystems. Also, silver carp can injure boaters when the fish leap out of the water.

How you can help

What Wisconsin is doing

Wisconsin has been working with states and federal agencies involved in managing the Mississippi River and Great Lakes to address aquatic invasive species, including keeping Asian carp from getting established in the Upper Mississippi River and in the Great Lakes. The two basins are artificially connected through the Chicago waterway system. Wisconsin has joined other states in legal action to sever that connection [exit DNR]. Other actions are listed below.